The Museum of Boulder is excited to collaborate with a group of Arapaho artists in the region to create a pop-up exhibit exploring the notion of indigenous artists coming back to their historical territory. RETURNING will feature the contemporary work of ten artists, with their individual perspectives displaying exclusive visual stories told in their personal styles. Robert Martinez, the Museum’s lead partner, notes that this is the first group contemporary Native art show featuring Arapaho artists in the area. RETURNING will open to the public on December 3, with the opening reception on the evening of December 2.

Robert Martinez was born in Wyoming on the Wind River Reservation in the small city of Riverton. He grew up a part of many different cultures as his lineage is Spanish, Mexican, Scotts Irish, French Canadian and Northern Arapaho. He graduated Riverton High School at 17 and through a scholarship, attended the Rocky Mountain College of Art & Design. He graduated with a Bachelor of Fine Arts specializing in Painting & Drawing and minoring in sculpture, in 3 years and at age 19, becoming the Youngest Native American to graduate from RMCAD at that time.
As he was brought up in the center of the reservation, his native heritage remains a  constant inspiration and source of ideas for his work. Living in among the hard working  people of the West and experiencing their issues also deeply influence his creations.  The past and present often resonate strongly in Wyoming and those historical and contemporary chords echo throughout his work.
Much of Robert’s current work uses the historical imagery, myth’s and stories of the West & Arapaho Culture combined with modern themes to create images that have a  statement on the issues of today. Using intense vibrant color and contrasting shades of  light and dark, he paints and draws striking forms that are confronting and engages the  viewer.
His paintings and drawings have been shown across the Nation and have garnered noted acclaim. He’s been given Wyoming highest award for the arts, the Wyoming Governors Art Award. His work is included in the permanent collections of the Brinton  Museum, The Plains Indian Museum at the Cody Center of the West, and the Smithsonian National Museum of the American Indian.
A strong supporter of Education and of the Arts, Robert devotes time to helping and  mentoring emerging artists on his reservation and through out the Nation. He gives back to the community by speaking about art topics, giving workshops, and demonstrates his style to schools, agencies and art groups. 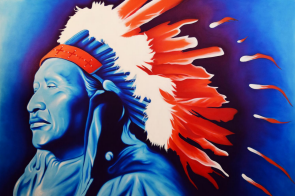 Brent Learned is an award-winning and collected Native American artist who was born and reared In Oklahoma City, Oklahoma. He Is an enrolled member of the Cheyenne-Arapaho Tribes of Oklahoma. Brent graduated from the University of Kansas with a bachelor degree In Fine Arts.

Brent has a passion for being active In the community.He was one of the curators of the Wintercamp show at the National Cowboy and Western Heritage Museum. The Wintercamp show was geared toward giving new artists In the community an opportunity to show their work. Most importantly, this was the first all Native American show to feature contemporary Oklahoma Nattve American art. Brent has also had the honor of working with Dale Chihuly’s team on the Eleanor Blake Kirkpatrick Tower (Chihuly’s tallest installation to date) that resides In the Oklahoma City Art Museum.

As a Haida artist residing in Wyoming I am driven to explore and innovate.  The woods and natural materials I used that were once abundant in the Pacific Northwest are now scarce. This scarcity of resources has led to a creative drive which has been vital to my survival as a Haida artist in the high plains desert.
My subject matter is Haida; both traditional and contemporary. As Native artists we are capable of inhabiting both forms simultaneously, I am free to create without the confines of being bound to one or the other.
My favorite mediums are yellow cedar and fresh red alder. Their suppleness, delicacy, strength, and willingness to be transformed in both form and texture make them perfect mediums for exploring Haida art.
Each day brings with it a new desire to practice the forms of those who have come before me and a push to innovate in the forms that are yet to come.  This inspiration is my daily spirit to create.

Dallin Maybee was raised on the Cattaraugus Indian Reservation in Western New York, home of the Seneca Nation of Indians. He is a multimedia artist working in a variety of forms, including dance, beadwork, oil painting, jewelry, illustration/ledger art, and carving. Dallin’s work is in several public and private collections worldwide including the Smithsonian’s National Museum of the American Indian.

George Curtis Levi is an artist raised in the Western Oklahoma towns of Geary, El Reno, and Concho. He grew up immersed in the Cultural and Arts of the Arapaho and Cheyenne People. He is Arapaho and also Cheyenne & Oglala Lakota.
The Artwork of the Arapaho is hailed as some of the Most Beautiful Art produced amongst all Native American Peoples, whether it is Beadwork, Ledger Art, Rawhide Work or Clothing, It all tells a story of the Individual who produced it and of the Arapaho People.
George is named after his Grandfather George Levi who was an Amazing Southern Arapaho Athlete in the 1920s and also carries his Arapaho Name “Big Bear”. George has participated in all of the major Indian Art Markets across the US and has art in many Museums and Institutions and Private Collections.

As an enrolled member of the Northern Arapaho Tribe, she is proud of her Native American heritage. Legends and traditions of her native Wind River Reservation in Wyoming are often subjects for her unique works of art.
Residing in the heart of the Nebraska sand hills near the small community of Seneca, her family encourages her to develop her talent and career at every opportunity.  As a former competitor, her husband Jim, a former PRCA saddle bronc rider, their children Chessney and son Jesse, and granddaughter Jymie competing in rodeo is also an important part of her life and is often inspiration.
Continuing to study, Jackie credits “the greats who have not only taught me technique but expression, dedication, and determination.  Some of these people have been Benjamin Harjo, JR, King Kuka, and Reynold Brown.
As Jackie’s work becomes recognized, awards and honors are accumulating; winning Best of Division for graphics at the prestigious Santa Fe Indian Market, the Aplan award, the Diedrich award, and the Bonnie Ericksen Award at the Red Cloud Indian Art Show.  The National Campaign Office for the Smithsonian’s Museum of the American Indian has commissioned work.  More of Jackie’s works can be found in private, corporate, and university collections throughout the United States, Japan, Australia, Germany, South Africa, and Great Britain.
Awards include honors at the Santa Fe Indian Market, Santa Fe, NM; Heard Fair, Heard Museum, Phoenix, AZ: Cherokee Art Market, Tulsa, OK; Northern Plains Indian Art Market, Sioux Falls, SD; Red Earth Festival, Oklahoma City, OK; Cahokia Contemporary Indian Art Show, Collinsville, IL; Inter-Tribal Ceremonial, Gallup, NM; Lawrence Indian Art Show, Lawrence, KS; Artesian Arts Festival, Chickasaw Nation, Sulphur, Ok.
Jackie’s works have been included in “Let the Spirit Speak”, Pope VI Institute of the Arts, Washington, DC: “Our Way Continues”, Denver Art Museum, Denver, CO, The Sioux Indian Museum, Rapid City, SD, Museum of Anthropology, Lawrence, KS; “Influences of our Grandparents”, Oscar Howe Museum, Mitchell, SD; and “Heart Dreams and Legends”, a joint indigenous exhibit that toured the US and Australia.  Her works were also included at the Bradford Brinton Memorial Museum, Sheridan, WY: “The Cowboy, Rodeo & WYO Rodeo”, “West of the Mississippi”, and “Ladies’ Choice.”

Ridgely is a member of the Northern Arapaho Tribe located in Ethete, Wyoming. His Northern Arapaho name, Nii’eihii No’oteihi, means Powerful Eagle. Ridgely has a BA in education and has developed educational curriculum in the Arapaho language as well as cultural sensitivity programs.As a lifelong artist, Ridgely was inspired by the artwork of his father, Eugene Ridgely Sr. Ridgely has been producing art professionally since the 1980s. His artwork has been exhibited in galleries nationwide.