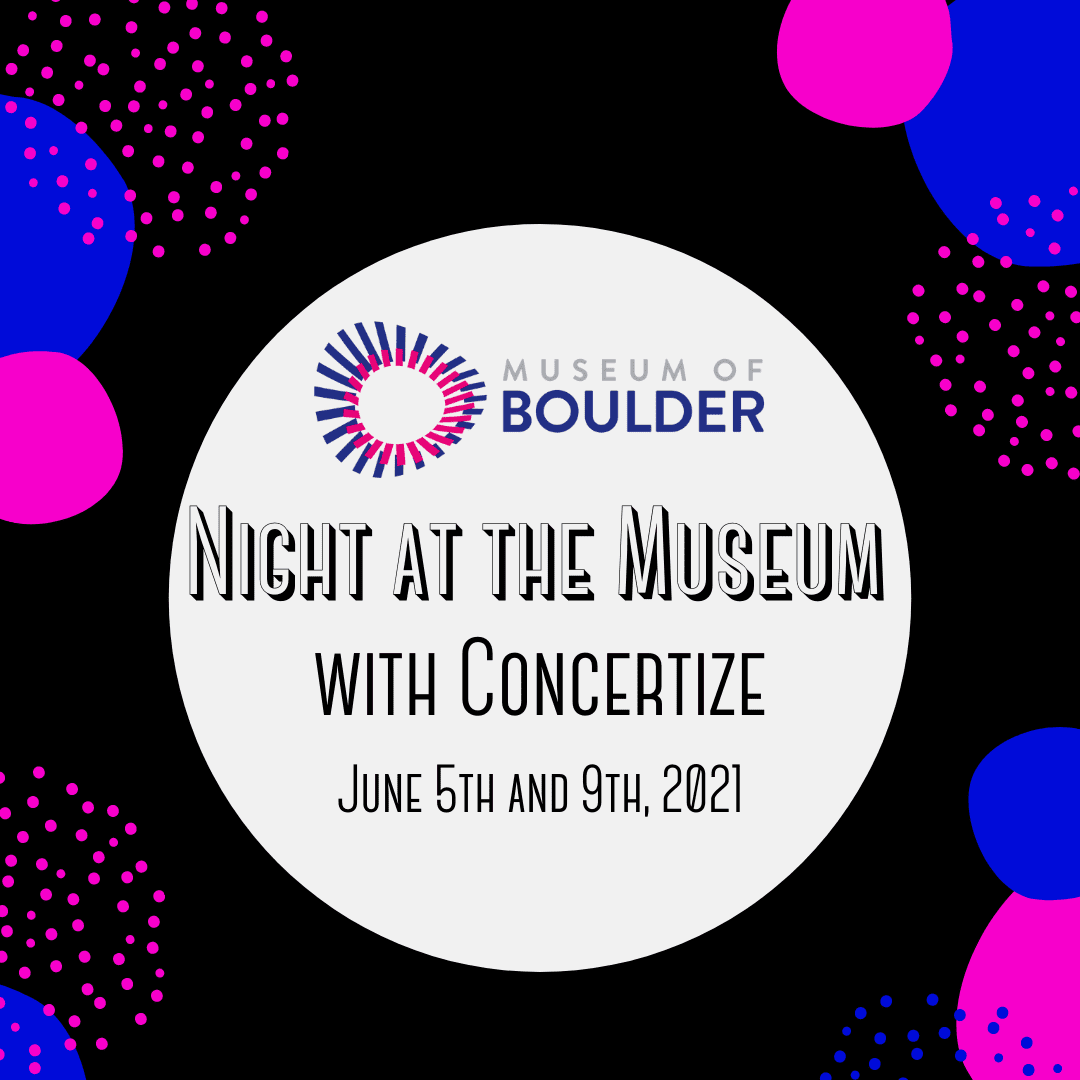 Night at the Museum with Concertize

Join us at The Museum of Boulder for a musical experience, included in your ticket price is access to The Museum after hours.

Concertize is a Boulder-based company that connects musicians, venues, businesses, production professionals, and presenters with the goal of making music happen in more places, from vaccine clinics to concert halls. Concertize provides services that facilitate concert-planning, creating more successful and profitable events. Its vast network of talent and expertise lend it the ability to quickly and efficiently compile all the necessary information to make a performance happen at a certain location. Concertize also manages the Ajax Ensemble, a chamber group of internationally-acclaimed musicians. The Ajax Ensemble is available for any engagements ranging from private functions to full-on concert experiences.

Praised for his “sensitive” playing by the Santa Barbara Independent, violinist Tom Yaron has performed in various constellations in North America, Europe, and Asia as concertmaster of the Moritzburg Festival Orchestra in Germany, Pacific Music Festival in Japan, and the Sarasota Festival Orchestra. He holds a bachelor’s degree from The University of California, Santa Barbara, a master’s degree from the Juilliard School and an Artist Diploma in String Quartet Studies from the University of Colorado. Yaron was a founding member of the Ajax Quartet which served as the graduate string quartet in residence at the University of Colorado, Boulder from 2017 to 2019. He performs with the Boulder Bach Festival, Boulder Chamber Orchestra, and Lincoln Center Stage on Holland America Line, the New World Symphony in Miami, and is a violinist for Fever Labs’ Candlelight concert series in Denver.

Violinist and violist Joshua Ulrich has performed internationally as soloist, recitalist, and chamber musician. His growing artistic reputation is supported by having collaborated with such esteemed artists as James Tocco, Awadagin Pratt, and Anton Nel. He was educated at the Juilliard School and the College-Conservatory of Music at the University of Cincinnati. Joshua has just completed a postgraduate degree at the University of Colorado-Boulder, where he and the Altius Quartet were the Fellowship String Quartet-in-Residence working with the Takács Quartet.

Joseph Howe is a cellist based in Boulder, Colorado, where he maintains an active performing career. Mr. Howe is the principal cellist of the Boulder Chamber Orchestra, with whom he recently appeared as a concerto soloist, and the assistant principal cellist of the Greeley Philharmonic. ​He has also recently performed with the New World Symphony, the Colorado Springs Philharmonic, and the Boulder Philharmonic. As a baroque cellist, he performs with Boulder Bach Festival’s period instrument ensemble. Other recent festival appearances as an orchestral and chamber musician include National Repertory Orchestra, Colorado Music Festival Orchestra, and American Bach Soloists Academy. Joseph holds degrees from University of Oregon, where he studied with Steven Pologe, and University of Colorado at Boulder, where he studied with Judith Glyde.